All of Strasbourg in 3 days

Are you looking for things to do in Strasbourg? Here are a few things that are not to be missed… Enjoy your stay in Strasbourg!

If you only have one day in Strasbourg, you have to see the historic city centre and its 142m-high cathedral, a true gem of religious architecture. The Petite France is also a must-see, with its narrow streets, its half-timbered houses from the 16th and 17th centuries, and its canals.
The “Grande Ile” and the Neustadt are listed as UNESCO World Heritage.

To get the most from your visit, be sure to hire audio-guides from the Greater Strasbourg Tourist Office.

As you walk through the streets, you will be able to admire, amongst others, the cathedral of Notre-Dame, Kammerzell House, the Palais Rohan; several squares such as Marché-aux-Poissons, Marché-aux-Cochons-de-Lait, the Rue du Vieux-Marché-aux-Poissons, Corbeau Bridge, Gutenberg Square and its statue of Gutenberg; the Chamber of Commerce and Industry building; streets like Rue des Tonneliers, Rue de l’Epine, Rue des Dentelles, Rue des Moulins and Rue du Bain-aux-Plantes; the Church of Saint-Thomas, the Ponts Couverts (covered bridges), the Vauban Dam, the ENA (French National School of Administration), the Saint Nicolas Quay and St Nicolas Church.

Once you’ve made your way back to the cathedral, take on the 332 stairs that lead all the way to the viewing platform from which you can soak in the panoramic view of the city and the valley of the Rhine.

Hungry after the climb? Don’t rush off too soon… At exactly 12:30pm you can watch the clockwork automatons of the Astronomical Clock dance! This masterpiece was built between 1571 and 1574, and its mechanisms were renovated in 1842.

After enjoying a traditional lunch in an Alsatian winstub, take a guided boat tour and discover Strasbourg as seen from the Ill River. Cruise from the historical centre, through the Neustadt, and all the way to the European district.

And why not end off the day with a visit to one of Strasbourg’s many museums which you certainly spotted during your morning stroll: the Oeuvre Notre-Dame Museum, the three museums of the Palais Rohan (the Archaeological Museum, the Fine Arts Museum and the Decorative Arts Museum), the Alsatian Museum or the Museum of Modern and Contemporary Art. 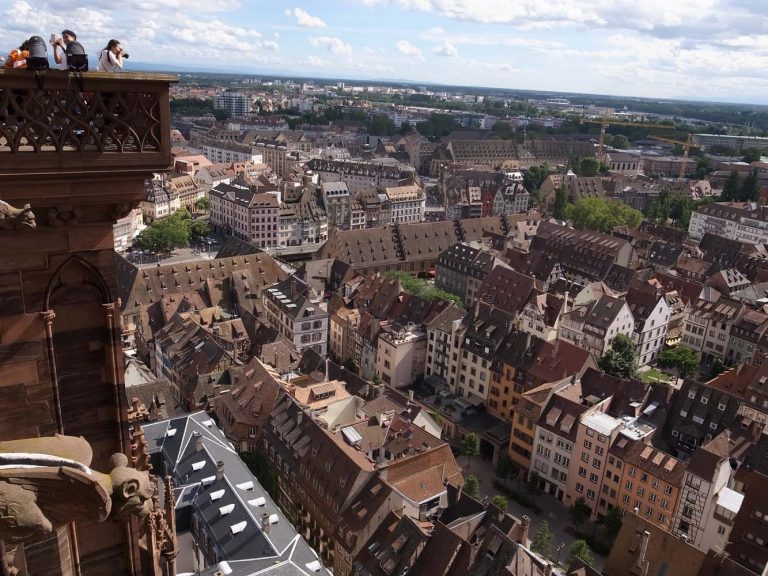 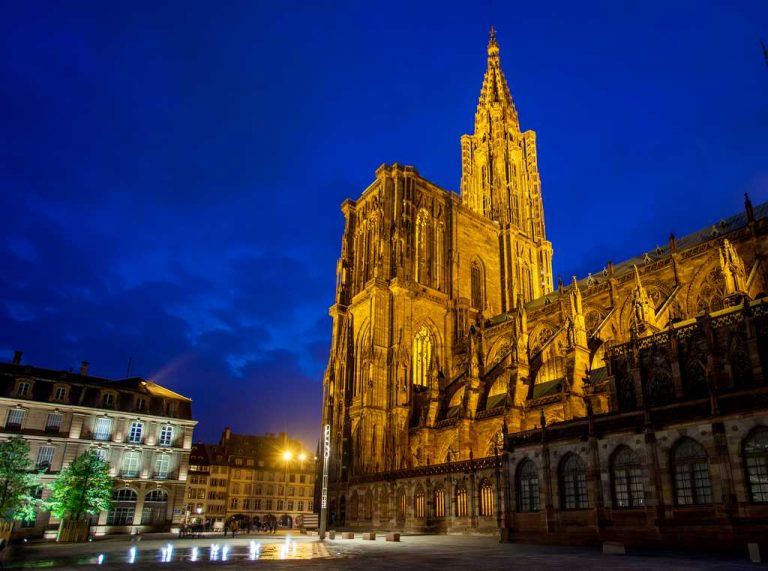 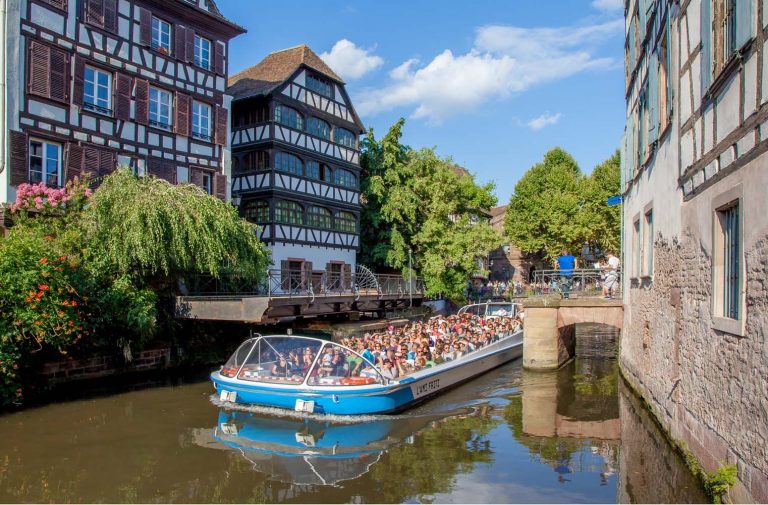 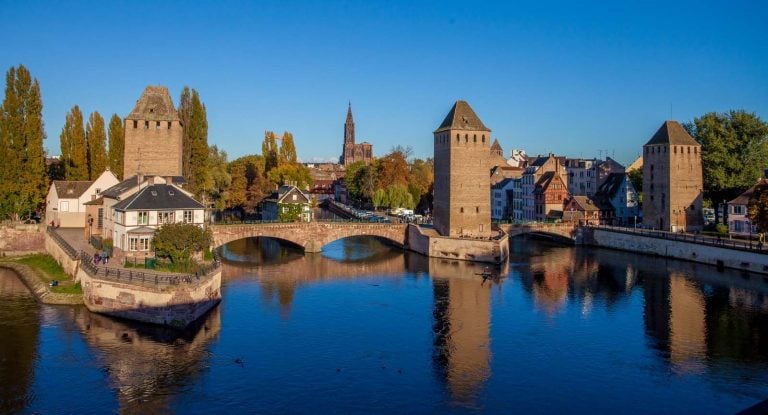 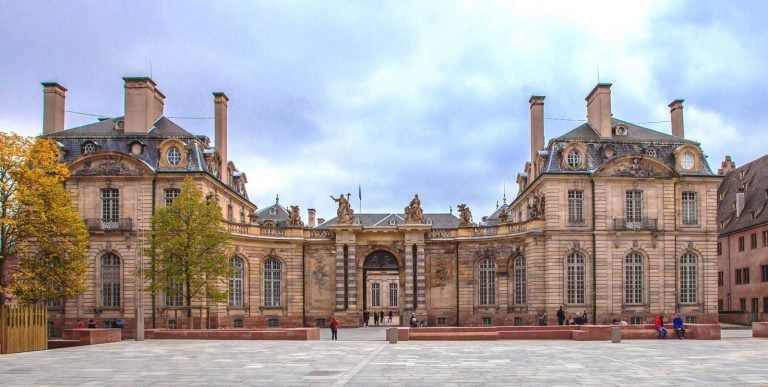 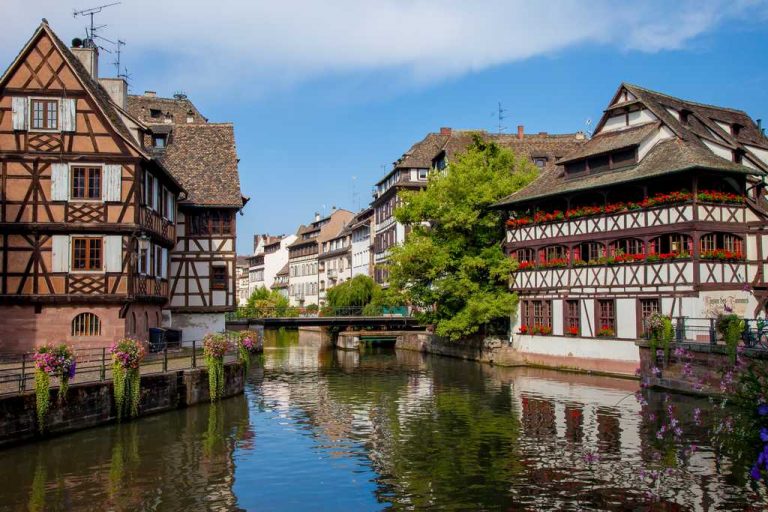 For your second day in Strasbourg, we suggest a visit to Place Broglie before exploring the German Imperial district where you’ll discover a different side to the Alsatian capital, far from the narrow streets and half-timbered houses you’ve seen so far. Built by the German empire after the Franco-Prussian War of 1870 to cement Strasbourg’s new role as the capital of the Reichsland in Alsace-Lorraine, the Neustadt (“New City”) stands in sharp contrast to the city’s historical centre and its latticework of winding streets. 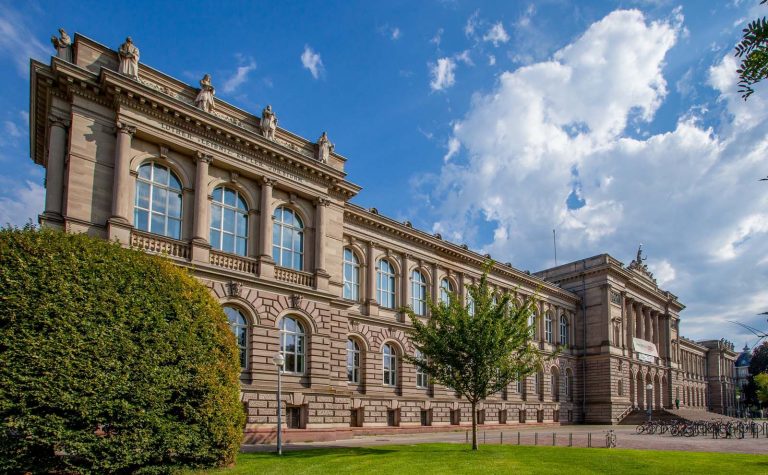 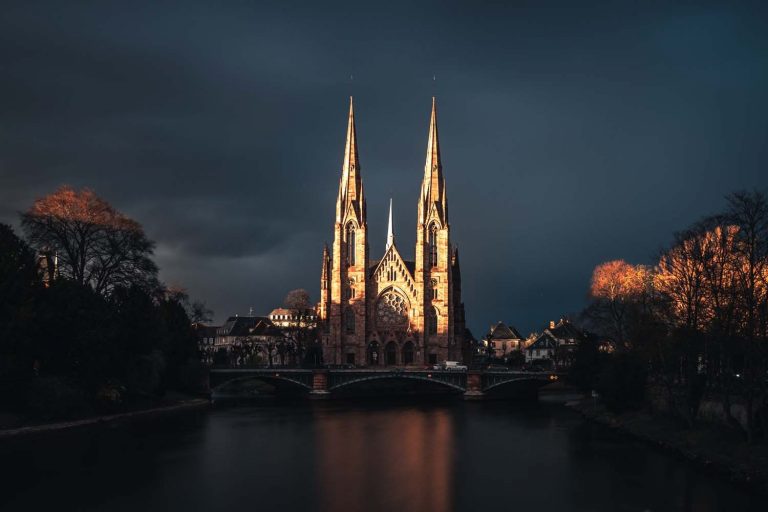 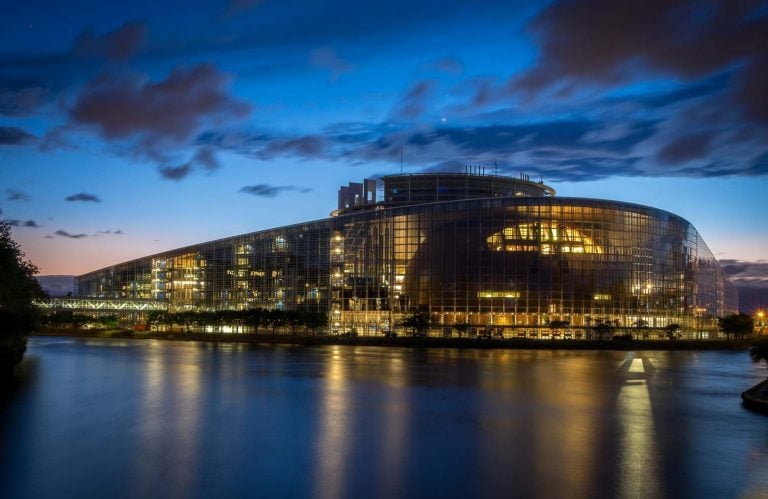 This part of the city is characterised by its wide avenues and boulevards: Avenue de la Marseillaise, where you will find the Tomi Ungerer Museum – International Centre for Illustration, Boulevard de la Victoire, with the Zoological Museum and the Municipal Baths, and Avenue de la Paix and its Synagogue. This district’s most well-known square is the Place de la République, formerly the Kaizerplatz, and its political and administrative centre. The square is surrounded by impressive and imposing edifices in the Prussian architechtural style, such as the Palais du Rhin, the Prefecture, the National and University Library, and the Strasbourg National Theatre. Just around the corner you can also see Saint Paul’s Church (Place du Général Eisenhower), the Palais Universitaire (Place de l’Université), and the Maison de la Radio et de la Télévision (Place de Bordeaux).

Need to unwind? Take a stroll along the paths of the Botanical Garden (Rue Goethe), which are sure to delight the little ones, or attend an introductory science workshop or a children’s show at the Zoological Museum and the Planetarium (Rue de l’Observatoire).

After lunch at one of Strasbourg’s many restaurants, dive into the European district.

The founders of Europe wanted to create a powerful symbol of reconciliation between nations. This is why Strasbourg is one of the only cities in the world that houses international institutions despite not being a national capital. Strasbourg has held this European role since the end of the Second World War and it has led to the construction of an entire European district within the city, including the European Parliament, the Palais de l’Europe, the Human Rights Building, the Agora, the European Pharmacopoeia, the Winston Churchill Building, the Salvador de Madariaga Building, the Pierre Pflimlin Building, and the Lieu d’Europe. The ARTE headoffice is also nearby.

While you’re in the area, recharge your batteries in the revitalising Orangerie Park, the city’s green lung only a few steps from the European institutions. The park covers 26 hectares and is the ideal place for a family outing. Children will love the small zoo, mini farm, stork breeding sanctuary and the play area. In summer you can also enjoy ice creams, waffles and other treats on sale.

Why not pop over and visit our German neighbours? You can get there by tram or by renting a bicycle.
While still on the French side of the border, you can amble through the Jardin des deux Rives (“Two shores Garden”) before crossing the Rhine on the beautiful footbridge which joins together France and Germany, designed by the architect Marc Mimram.

On the other bank of the Rhine stands the small German town of Kehl. Strasbourg has built strong ties with Kehl, and the two cities collaborate on many partnerships. These ties are not only political or institutional however; they are part of the daily lives of the people of both cities, who often hop across the border from one country to the other.

While in Kehl, be sure to climb to the top of the panoramic observation tower and take in the sights from this exceptional viewpoint.

You can also visit Weinbrenner House (Hauptstrasse), the Villa Schmidt (Ludwig-Trick-Strasse), the Hanauer Museum (Friedhofstrasse), the Handwerks Museum (Oberdorfstrasse), and the Heimat Museum (Landstrasse), do some shopping, or take a dip in the open-air swimming pool (Schwimmbadstrasse).

After lunch, there are still so many things to do! Do you want to continue your cultural exploration in the Alsatian capital with a museum visit or a stroll through one of the many districts you haven’t yet had the chance to see? Or would you prefer to browse the city’s many shops? Or perhaps you want to get out into nature?

In Strasbourg, anything is possible !